You can’t help but be moved by a trip to Le Morne. It refers to the isolated part of the island, located in the South-West edge of the coast. Not only is the hike incredibly beautiful, with a reward of jaw dropping views at the top, but its poignant past lives on. Visiting sites of such historical significance can really encourage you to view the world from a different perspective. Le Morne beach is one of the most beautiful scenery in Mauritius.

It might surprise you to know that Le Morne Brabant mountain is one of the two UNESCO World Heritage Sites of Mauritius. Well, the reason lies in Mauritius’ bloody colonial past. During the 19th Century, Mauritius was a British Colony (they took it away from French hands in 1810) and both during the French and British colonization, runaway slaves used Le Morne Brabant as a refuge to escape their masters.

Legend has it that when Britain abolished slavery in 1835, a group of policemen were sent to Le Morne Brabant to break the news to the, now legally free, former slaves. The catch? Because Social Media didn’t exist yet, the slaves rightfully assumed that the police were sent to arrest them and so they climbed to the top of the mountain and jumped to their death.

Ever since, Le Morne Brabant is seen as a silent witness to one of the world’s darkest practices and today is a symbol of freedom and hope. It became a UNESCO World Heritage Site in 2008 and today it is visited by thousands of hikers for its impressive view of the entire island.

The Mountain is home to numerous endemic and near-endemic flora species, including the Trochetia boutonania, Bois Chevre, and Hibiscus fragilis. The ebony trees on the mountain support abundant bird populations as well.

This half day hike is one of the most popular hikes on the island and will give you spectacular ocean views. The first half of the hike is gentle enough with opportunity to see pink pepper plants and other local flora, while the second half to the summit requires a little more effort. It is a truly stunning place to see those panoramic views of the West.

Before you attempt to hike Le Morne Brabant you should be aware that it isn’t a very easy hike although it is far from being the most challenging one.

Here’s some hard facts about Le Morne:
• The total length of the hike (roundtrip) is 7KM (4.34 miles) half of which takes place on an even surface and the second half on a very steep one.
• The maximum altitude over sea level at the highest reachable point is about 500 meters (1640 feet)
• The average duration of the hike is 3 to 4 hours give or take.
• The weather can change at ANY point of the hike since Le Morne Brabant has a unique micro-climate.

Recommendations:
• Go early in the morning to avoid the stronger sun
• Do not attempt it in rainy days: the trail is extremely slippery & the clouds won’t let you appreciate the best of its views
• Do not go alone
• Bring hiking shoes or tennis with a very good sole
• Wear lots of sunscreen and a cap
• Bring mosquito repellent
• Carry with minimum 1.5 Lt. of water per person, a couple of bananas (or energy intake) and a light lunch

The Morne Brabant beach is undoubtedly part of the most beautiful beaches of the Mauritian coast. If this beach is a must visit during a stay in Mauritius, it is because of this exceptional environment that surrounds it: lush nature, almost wild and verdant mountain that offers a contrast of colors with the immaculate whiteness of the sand. Its location also allows you to admire the sunsets in a paradisiacal setting, perfect for those staying with their loved one. The Morne beach is divided into two parts: the northern part which is a privileged place for swimmers and idlers who spend their holidays in Mauritius to enjoy the sun and the crystal clear water to relax. The south part of the beach welcomes mostly water sports enthusiasts including kitesurfing and windsurfing.

Located in the south, Le Morne is not only a UNESCO World Heritage Site but also a popular kite-surfing spot. This is definitely one of Mauritius’ top must see places. It is where professional kite surfers come to hone their skills, budding kite surfers train to become professionals, and non-kite surfers watch with their jaws dropped. If you’re not keen on kite-surfing, there’s also regular surfing wake-boarding, water-skiing and other water sports for a dose of adrenaline rush.

Feeling brave enough to pursue a bold adventure? What are you waiting for? Time to get out there and chase the dream! Have fun in Le Morne!

More attractions in the South of Mauritius 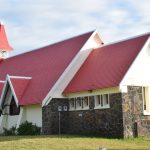